Argentinian legend Diego Maradona, widely considered one of the greatest footballers of all time, has died aged 60.

The World Cup winner and former Napoli great passed away at home after suffering a cardiac arrest.

Maradona has had a serious of health issues since ending his playing career, as well as fighting alcohol and drug addictions.

He was hospitalised in 2004 with heart and respiratory issues and was in hospital again in January 2019 with internal bleeding in the stomach. In November 2020 he underwent brain surgery after the discovery of a blood clot.

Born in Buenos Aires in 1960, Maradona made his name as a teenager. A classy number 10, he combined a unique ability to dribble and creativity with a tenacious approach to the game that made him one of the most loved footballers to ever play the game. 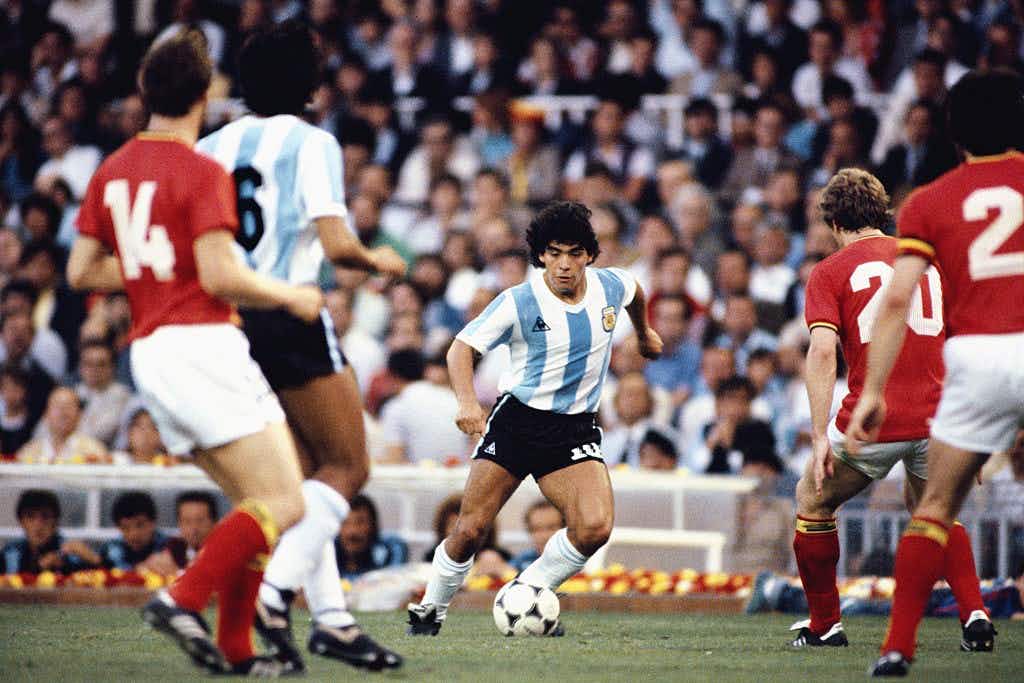 Truly one of the greatest players the game has ever seen, Maradona consistently shone at international level.

He made his Argentina debut in 1977 at just 16 but was omitted from the squad that went on to win the 1978 World Cup. His quality was undoubted by 1979, when he scored six times in six appearances to lead Argentina to the Fifa World Youth Championship. His first international goal, scored against Scotland at Hampden Park, came later that year.

Brilliance and controversy consistently and closely followed each other throughout his career. His first World Cup, in 1982, saw him score twice against Bulgaria but his frustration at being kicked all tournament grew and he was sent off as Argentina trailed 3-0 to bitter rivals Brazil.

By Mexico 1986, Maradona was Argentina captain and the best player in the world. His performances only confirmed that as he led his country to the trophy, scoring a memorable brace against England at the Azteca, first punching the ball in for his infamous ‘Hand of God’ goal before scoring one of the greatest goals in World Cup history, a breathtaking solo effort that started in his own half. 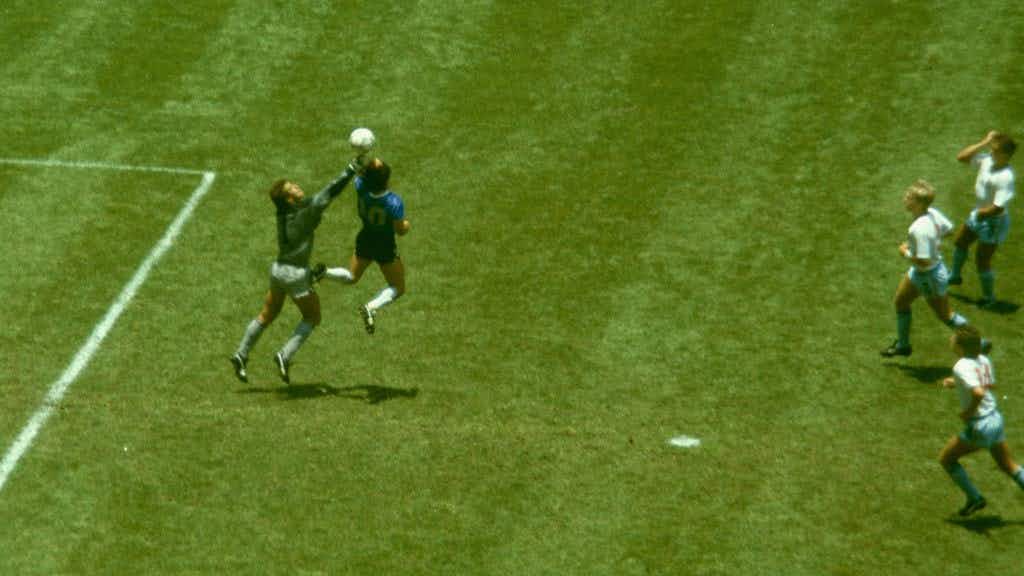 He scored twice more in the semi-final defeat of Belgium and assisted the winner in the final against West Germany.

He captained his country once again in Italy in 1990, where he was playing his club career by then, but a persistent ankle injury stopped him from dominating matches as he had in Mexico. Maradona’s Argentina still reached the final, where they lost to West Germany in a replay of the 1986 final.

Four years on, Maradona played just twice in the US. Once again, his footballing genius and flawed persona shared the stage. Maradona scored a superb goal against Greece before failing a drugs test and heading home. That failed drugs test meant the end to an Argentina career that saw him score 34 times in 91 appearances. 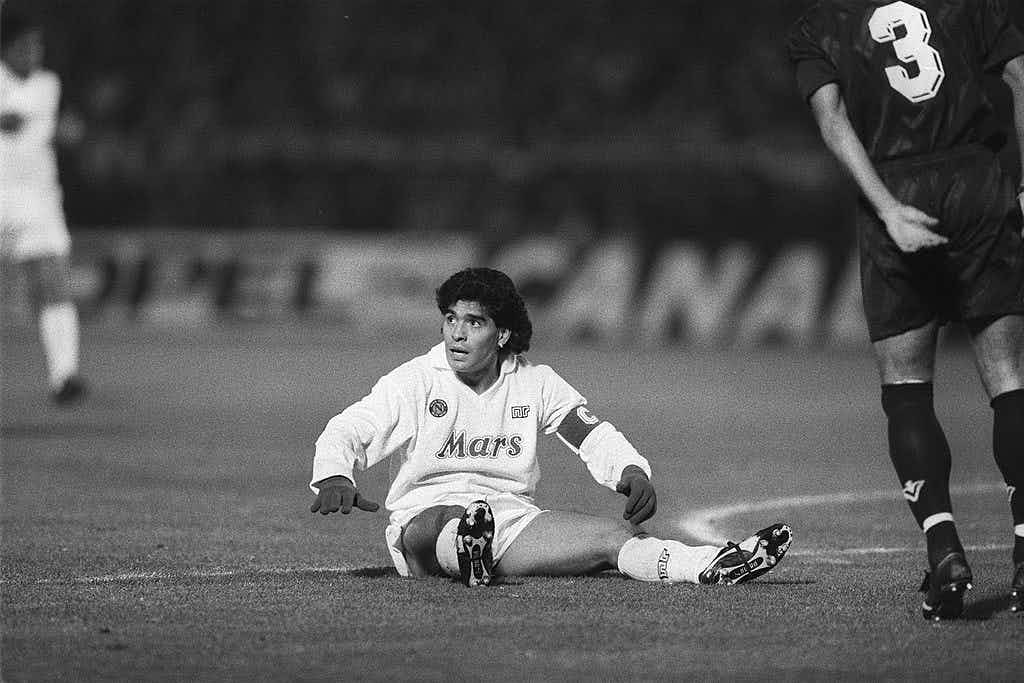 Maradona made his professional debut for Argentinos Juniors 10 days before his 16th birthday. After scoring 116 goals in 166 appearances, he moved to Boca Juniors, where he won the league title in his only season.

In 1982, Maradona made a world record £5m move to Barcelona. While there, he became the first Barcelona player to be applauded by Real Madrid fans after a spectacular El Clásico solo goal.

However, his time at Camp Nou wasn’t all smiles. After battling hepatitis, he suffered a broken ankle in September 1983 as he was on the receiving end of a horror tackle from ‘The Butcher of Bilbao’ Andoni Goikoetxea.

Barcelona took the decision to sell him and received £6.9m from Napoli that summer, making Maradona the first player in the history of football to break the world record transfer fee twice.

Maradona became a hero in southern Italy. Welcomed by 75,000 fans at his presentation, he hit the heights of his career as a Napoli player. He inspired the club to two Serie A titles and the Uefa Cup, went on to become the Napoli’s all-time top goalscorer and had the club retire the number 10 shirt following his departure.

However, his personal life grew more troublesome, as his battles with cocaine addiction only grew worse. After serving a 15-month ban for a failed drugs test he left the club in 1992 and played for Sevilla and Newell’s Old Boys before returning to Boca Juniors, where he played infrequently from 1995 to 1998 before ending his career.

While still not retired as a player but serving Maradona had two unsuccessful coaching roles with Textil Mandiyú and Racing Club in the mid-1990s.

He was then, 13 years after his last spell in the dugout, appointed Argentina manager in 2008 and led them to 2010 World Cup qualification despite overseeing a record 6-1 defeat to Bolivia. Argentina reached the quarter-finals of the 2010 World Cup, where they lost 4-0 to Germany.

The AFA insisted he would be offered a new four-year contract after the tournament, only for the board to unanimously reverse the decision two weeks later.

Maradona then took jobs with Al-Wasl and Fujairah in the United Arab Emirates before returning to the Americas to coach Mexican outfit Dorados from September 2018 to June 2019. From September 2019 he was in charge of top flight Argentinian club Gimnasia. 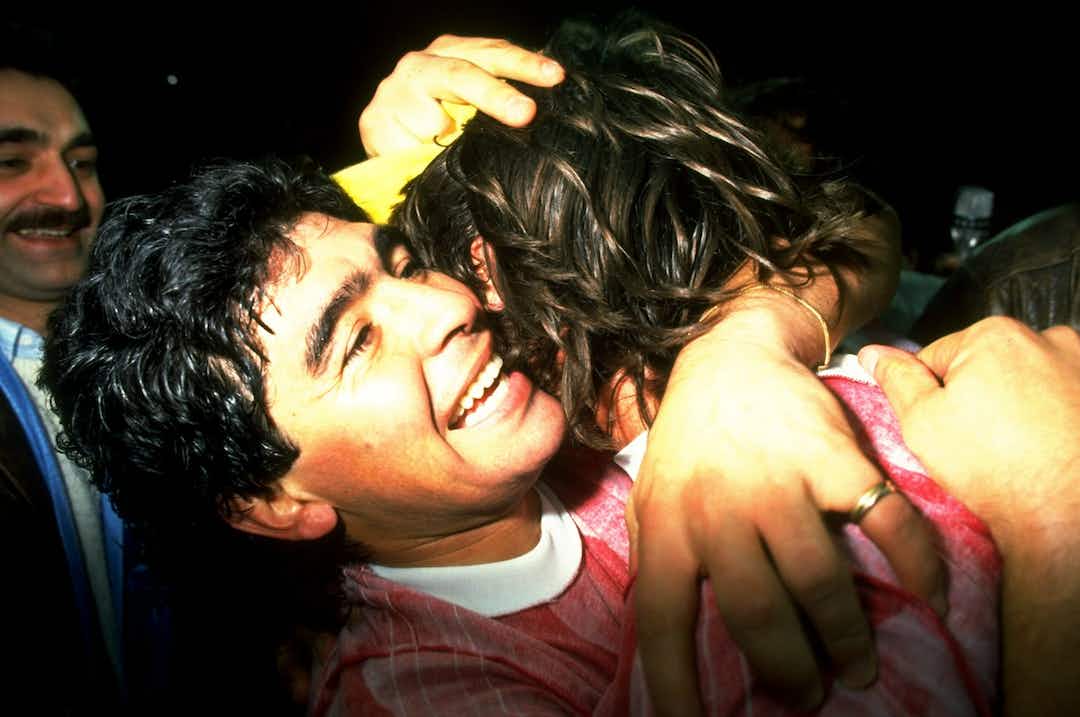